We had a going away bbq at the pier with the team the night before. We had burgers and veggies and Nutella and dulce de leche pancakes and fruit. A feast! Eric shared stories from Australia and we just sat there, listening. Killer waves and sharks and freaky sky lights… We joked about hoping that my trip would be the complete opposite of Eric’s. No mountain waves, no sharks, no mystery lights.

I spent the night at my aunt’s apartment. I slept well, but not long. She drove me to the boathouse at 6am and helped me get ready. It was a chilly morning, covered skies, rain on the forecast but no wind. I had left the drybags ready the night before, all I needed was breakfast, load the bags on the board, and set off.

Loula came to the rescue with some warm oatmeal and greek yogurt and coffee. She also got me a couple of apples, knowing I would really miss those red things out there. Fruit! I didn’t want to carry too much of it since they go bad fast and they are heavy. What I was bringing along was purely functional and effective. That breakfast was the best thing that morning. 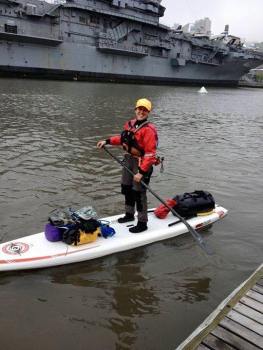 Gave everyone hugs, my aunt, Margaret and Lou, and simply paddled out of Pier 84 into the last hour of the ebb of the Mighty Hudson. Margaret was cheering from the end of the pier. Made me laugh. I saw Lou running towards the water and waved bye.

It was so cloudy! I remembered having a conversation about fog with Chris, one of our regular paddlers and friend, who advised me to bring lights in case it would be foggy, to which I replied explaining that I was taking lights because I felt I had to, but I was not planning on using them. Fog? Never paddled in fog in NYC, and I was not planning on paddling into the night. The unkown unkowns…

The thickest fog was visiting Manhattan that morning.  Had never seen anything like that in this area. But I knew the waterways well around Manhattan, what worried me was the East river going east of the city.That would be the first new landscape of the trip.

I stopped for a snack south of the Queensboro Bridge, and my phone started going off. It was my mom. She was following me on the GPS and had noticed I hadn’t moved in more than 4 minutes. “I’m eating, mom! I’ll see you in a couple of hours!” My family was meeting me for late lunch at City Island in The Bronx, where I would spend the night on my uncle’s sailing boat. But before that, I had to get through Hell Gate and up the East River. Some almonds and dry fruit were necessary for an energy boost.

I kept checking the map to see where that right turn would be, even though I have seen it countless times over the past decade but had never paddled that way. I was moving super fast thanks to the powerful flood current on the East river. Hell Gate was very interesting. The water moves like whitewater almost, but changes the pattern every minute or so. I found an eddy from where I just watched it, trying to find a line to follow and saw it switch places and switch places again. Oh well, I was just going to have to go for it. Unlike whitewater, there were no rocks down there that I could hit, just crazy water. I focused on staying on the board and steering once in a while, and just let the current take me.

It was only a couple of minutes and I left it behind. I could see Brother Islands ahead and the channel in the middle. I could also see Rikers on the far right, but I wasn’t sure. Maps are difficult to translate to the visual field. I headed straight toward North Brother. I needed to pee. After completely failing an attempt to pee in a cup, I figured getting off the board onto firm ground would be best. I arrived at North Borther Island and landed. Peed. Success. Let’s keep going.

It was raining and wind had picked up. The tide was slack, at best and I was getting tired. I couldn’t tell how much longer I would have to paddle to get to City Island. I hugged The Bronx, as suggested by the Coast Guard boat that approached me after I left North Brother, and hoped the wind would die down or that the rain would stop. I kept thinking that if it were a sunny day, I would be the happiest. So I kept thinking that the rain and the wind were circumstantial, and by not paying much attention to them, I could be enjoying myself. But I was tired and wanted to get there.

I could finally see the Whitestone bridge and endless water beyond it. I knew as soon as I went under the bridge, I’d see City Island. What I didn’t know was that The Bronx was shielding me from stronger winds beyond the bridge and that I would have to fight it all the way across to City. Yay.

The crossing was awful. I was moving sooooo slooooooow. I had doubts about where to aim. I thought City Island was actually the east edge of Westchester Bay. Again, maps and visual field. Complicated. I realized I was looking at City when I saw a woman in red pants running on a pier at the edge of the island. My aunt was wearing red pants that morning. I could not believe I had arrived. What a relief!! Food, please!

Landed on a beach by that pier where my family welcomed me. Had a delicious meal at the marina where the sailing boat lives and rested for the rest of the afternoon. I showered and changed into dry clothes. My uncle took me to the boat and showed me how to work the battery so I could charge things and then… Then, we started discussing aspects of the trip.

Pulled out my map of Long Island and just stared at it. He was telling me about things he knew abut the Long Island Sound and where to be careful with tidal currents and such. I kept staring at it. Located City Island and noted the tiny distance between Pier 84 and where I was and looked out at Montauk, and back at City, and back at Montauk. The map was the length of the boat table. On one end Manhattan, dwarfed by the size of Long Island, on the other end, far on the opposite end of the map, Montauk. What?!! I felt dizzy. No, really. I felt dizzy. Jules, overwhelmness. Overwhelmness, Jules.

Very much new to the blog world. Will start with telling how I got around Long Island on a paddleboard and hopefully tell more stories of adventure and exploration. View all posts by momentsofjules